General Discussion / This guy was slightly mad at me for doing this to him. This is a bug that happens to me once a while. 4 Dark blasts... Combine that with the other cards in my hand... Let's just say he wasn't pleased.
2

Social Media / Making my best friend rage on this game.

So here's it again.

No wonder the game is slowly losing pop...
4

Non-IW Discussion / Can somebody remove this spam on GD already?

« on: November 22, 2014, 02:05:34 PM »
Hello there, we all encounter it sometimes.
We encounter people who don't like to lose and then resolved into a vicious, verbal banter to make him/herself feel better.

Now i know that there already is a "report for spam" button. But that confuses people incl. myself because; what is spam exactly? does it include verbal abuse? Negative behaviour? Unsportmanship behaviour? or just what spam is; sending (malicious) links to players?

This should be developed further on.

Now, personally, i wouldn't care about people who begin to show negative behaviour and begins to talk bad. But some others might.
Which raises a few questions;

Do we need a report player function for verbal abuse?
What would be the punishment if so?
And
What about global chat functions? Should we get a mute button to mute certain people who are negatively talking about you or others? (I actually got that situation as a person who lost from me began talking bad about me in global saying i was badmouthing him.Luckely, i had plenty of friends on chat to prove him otherwise. (I also had the entire chat on picture so i just posted it there to prove him otherwise

(Here's the pic of that situation. I was laughing with him after a while though.)

So kind community. What do you think about player behaviours and possible punishments?

(I wasn't in the mood to create a long post, so if you have Q's you need answering. Please do send them here

My native language isn't english. Written errors can be possible in this thread.

This is NOT a bash thread: I'm not saying the card needs to be removed or that the sleeper faction in general is overpowered. Respect my opinion and i will respect yours.

Now, where to begin.

The last couple of days, since the release of the "scavenge the dead" rotation deck that everybody can use. I've began noticing something about "zombie abomination" in general.

Once your opponent (or yourself) deployed this card. You've lost/won the game.

Why would you say such things good sir? are you so terrible at using ability cards to remove this card from the game?


That's not the point, let us look at the description of this card and what it does. 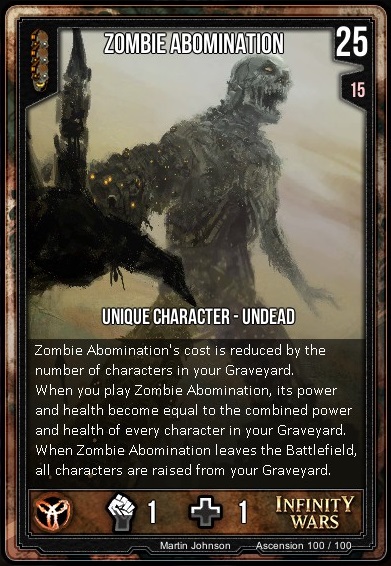 So the cards power is equal to the number of characters in your graveyard? Nothing fancy isn't?

On its own, this would not be an overpowering feature because it's only one element. But let's look a bit further.

"when zombie abomination leaves the battlefield, all characters are raised from the graveyard "


Now this is why this card is impossible to deal with.

This card is most often a mid to late game deployable card. As you require xx amount of cards in the graveyard first, before you can actually deploy it. Meaning that your opponent ( who has exhausted a lot of cards getting so far) looking really upset to you as he sees every single card he killed before back to the support zone. Making it available to you next turn. And Chances are, you've won the game in that turn.

The ONLY cards, i've seen had any effect to these are from the ability cards (there are others) "death ray" to destroy zombie abomination followed by a very predictable "mass death" if your opponent send them all out the next round.

What can be done to lower this massive impact to the game as there really is no solid counter to this card? (besides having x3 grave robbers and "zomb-b-gone's"?)


i'd say to remove the after death ability entirely and changing it into " whenever zombie abomination dies, 50% of the current graveyard is destroyed and the other half put in your hand. This way the opponent still have a chance to do something about the next phase.

That's all i have for now. Feel free to add your own opinion down below.

Deck Building / Deck: Pras, the traitor and his followers.

I'm quite new to this game and what i love the most about this game is building your own decks.

Now most decks i've done were a hit or miss situation. But i've never made a deck that was consistent and efficient before.
Until now...

Pras, the traitor and his followers.
http://infinite-network.com/deck/view/20312/pras-the-traitor-and-his-followers


I've run this deck through 4 days of consistent gameplay and i feel happy to show you all my first really succesfull deck so far. I'd also like to thank all the global chat roamers already giving this deck a first hand review and giving some thoughts on it so far.


This deck was build to counteract some players who tend to use their command zone to safeguard their cards when opposing verore decks. this deck also has a rush strat in mind but has a long term solution available and making players who rely on their active abilities from their commanders to think twice.

Turn 1-3 is a bit of a dull period. You'll rely on the first hand, you'll often pull atleast one aspirant/verore worshipper or both. In which case, keep the flame dawn aspirant in your hand until you can deploy him on the battlefield alongside prass and others, deploy your worshipper at the third turn if you can.

Turn 4-8
This is pretty much the fatigue period set for this deck and where you'll deploy Pras to the battlefield to kill or scare the commanders to the support zone.
When you first set out to attack, keep the aspirants as sacrefise to (few??) defences that may be up against you and follow up with the worshippers after they're buffed up. Pras should always be the last card of the line to increase the chance of him attacking the opponents fortress.

Turn 9-??
Finish of the enemy if you haven't. Throw in a mass death if you need it

When your opponent decides to pull out his commanders to the support zone, Pras no longer has any use to you for that role, as you can use desolation and heat wave to possibly kill them. so you can keep pras for future assaults or use him to defend and buff up more verore worshippers.

When the enemy is rushing himself or has a strong force you cannot defend. Use your character directed ability cards to dispose of them, aswel with the ability to use mass death.

Mass death often means victory in the next round (if your opponent goes all-in atleast), so have atleast one mass death in your deck. 3 of these MIGHT be usefull, especially when you messed up the first time. But you don't need 3 although it is recommended. (I personally have 2)

Desolation is great when your opponent turtles his hand in the support zone. Weakening them if not destroying some. I've listed 2 desolations to be used but you can always put a third one in your deck.

There was some discussion going on wether or not Heat wave should be changed into Lightning blast.
But i've decided to not use it for this deck because Heat wave can be used in combo with Desolation, adding up to 7 damage globally to your opponents characters in their support zone. But it's certainly not a bad card to have in this deck. Feel free to experiment with this yourself.

Dark blast is GREAT for this deck because you can stack up 2 of these in one turn and deal 24 damage to your opponent's fortress. This is great when you have unsufficient characters available to you to attack their fortress and forced into the defensive and they're low on health

Firebolt is always usefull in any deck, worshippers will thank you later

Hydra's are mainly there to safeguard you some buffs toward your worshippers and may act as a last line of defence if you fail to aquire any mass deaths to use or ran out on them.

I've included this location card because i figured that you're better safe then sorry if you lost all your character card in the previous turn(s) and they're suddenly going in for a mass assault on your fortress. Don't use it if the opponent manages to dash out less then 10 damage though

.
Note: I've thrown in one card, but feel free to add a second one if you want it fast.

Rift to the old world x1:
This card should be in your sideboard until you really need it against an opponent who has a location card.

Flame dawn centurion x3:
Feel free to add these to your deck when you fell comfortable to have stack up a great force to buff these cards even further toward a strong deck.

Fiery resolve x3:
Great when your opponent is ability heavy on your cards.

Vandalize x1(3):
Whenever they throw an artifact that messes up your play

exhaust x1:
Could be handy when on the defensive or when you need to remove a card from play that turn

« on: October 31, 2014, 10:16:54 PM »
Hello there all! I'm quite a new player (thanks to steam release i got my hands on this game), and as i happen to be european. I notice quite a lot that matchmaking is severely more impaired for me when i play in the afternoon, also i tend to play against the same player. but during the night (01:00 - 10:00 GMT) i barely encounter any long queue's and oppose different players every single time.

Which makes me wonder;

How big is the european base currently? Are there any statistics available about that? Because currently all my friends are USA while i'm just a sad, lonely Belgian

I know that this game doesn't have a very large fanbase (to which i'm actually quite happy because it keeps the annoying little kids and ragers out of here and doesn't spoil this rather awesome community. But still, i feel lonely

Any europeans here that can relate?